The Art of Demitasse — Past Visitor Center Exhibit

Since ancient times, coffee was said to have healing properties. After-dinner coffee was thought to assist digestion, enhance endurance, and act as an antidote for inebriation.

The Middle Eastern custom of drinking very hot, black coffee in small cups traveled to Europe along with the beverage, in the 17th century. It was the French, in the 1800s, who originated the demitasse and turned after-dinner coffee drinking into an art. Demitasse means “half-cup.” The cups are, typically, half the size of a regular coffee cup, holding two to three ounces of beverage. The smaller size facilitates the drinking of strong, after-dinner, specialty coffees, such as espresso, cappuccino, and Turkish coffee. Tea may be served in demitasse cups, but they are really meant for coffee. 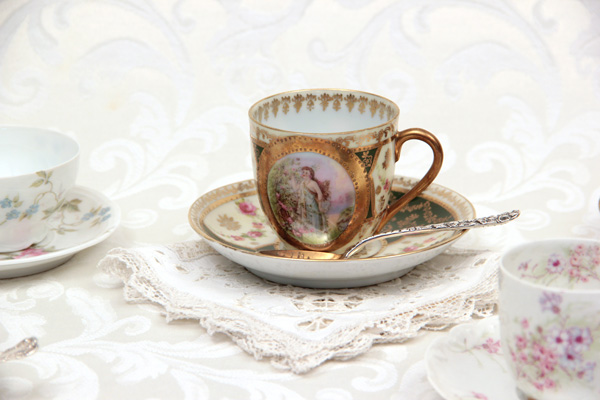 Certain rules of etiquette are followed for after-dinner demitasse serving and drinking. The coffee is strong and always served black. Cream is not offered and should not be requested. Sugar, however, is permissible. Demitasse cups are always used. These are placed on a matching saucer and accompanied by a demitasse spoon. Only one cup of coffee is served, and it is not polite to ask for a second.

The coffee can be served to guests in several ways. Cups can be brought in, unfilled, by a butler. A second butler brings the coffeepot. Each guest is offered a cup, which is then filled. The coffee can also be poured in the kitchen or butler’s pantry and served to guests on a tray by a butler. A less formal way of serving is to have the butler place the coffee and cups on a tray. This is then placed on a coffee table in front of the hostess. She pours the coffee, and the butler takes each cup to a guest. On occasion, a liqueur can be offered with the coffee or after the coffee has been taken.

By the 20th century, any woman who entertained, formally or informally, would have owned demitasse sets and served after-dinner coffee. Ida Caldwell McFaddin and Mamie McFaddin Ward owned numerous demitasse sets and spoons. The sets in our collection contain from four to twenty-four cups and saucers each. There are a few individual cups, suggesting a special find on a shopping trip or perhaps a souvenir purchased on a vacation, or a gift given by a friend. Although the sets are in very good condition, they do show the wear expected from frequent use. 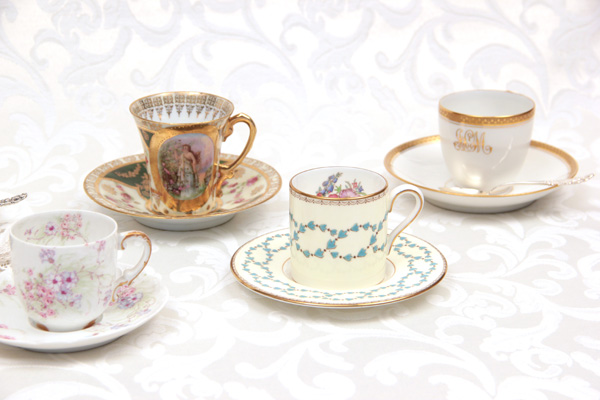 The exhibit, currently on view at the McFaddin-Ward visitor center, features twenty demitasse cups, sixteen matching saucers, and eleven spoons. The variety of patterns and styles would certainly have assured Ida and Mamie of having just the right demitasse for any occasion.

Upcoming events at the museum
Next Post:Diverse and dynamic lineup of guest lectures for 2015