Many of us know the story behind the Lucas Gusher at Spindletop, the event that changed the history of Beaumont forever, and pushed the city into the 20th century.

But the town of Beaumont was born on the thickly wooded banks of the Neches River nearly a hundred years before that day in January 1901.

Join us September 18th, as Rob Blain joins us to talk about his new book Early Beaumont. A native son of Beaumont—educated at both Beaumont High and Lamar University—Blain’s new book is the latest addition to Arcadia Publishing’s popular “Images of America” series.

In his talk at the McFaddin-Ward House, Blain will detail the story of those early days in Beaumont, from the settlers at Tevis Bluff, to that infamous oil gusher, on through the second Spindletop in 1925; all events that ushered in a new era in southeast Texas, and the building of a gracious city.

As always, this lecture is free and open to the public. Doors open at 6 p.m., and the talk begins at 6:30. A reception will follow, along with an opportunity to buy signed copies of Early Beaumont. Call (409) 832-1906 for more information. 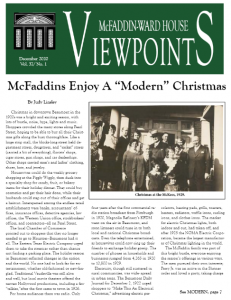