Come for a unique chance to see the museum at night at our eggnog evening!

Start at the visitor center for tasty treats and eggnog then stroll over to the house for a self-guided tour.

Cyclists: Bring your bikes and join a casual group to ride around town to view Christmas lights, ending at the McFaddin-Ward House Museum for eggnog and a tour.

**LIGHTS and HELMETS are required and Christmas lights on your bike are encouraged. The streets are open to normal traffic flow, so please ride with caution and obey all traffic laws (ride at your own risk). 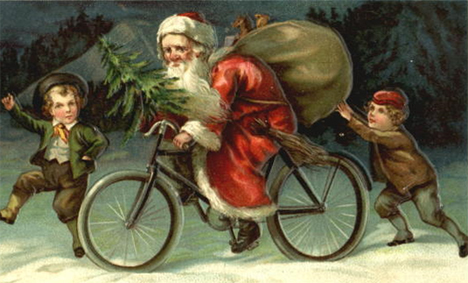 Have your photo taken in the museum! One day only!

This is your once-a-year chance to dress up and have your family picture taken for holiday cards on the museum’s grand staircase! Bring your own camera, and our museum staff photographer will take the photo for you.

All visitors must register in the visitor center at 1906 Calder Ave. the day of the event.

Join us for our upcoming conference to learn the basics of conservation, from doing it yourself to hiring the best in the business.

Conservation Savvy: From Expert to DIY

We all have treasured objects in our possession–whether they are personal belongings passed down from loved ones, or priceless museum artifacts. Proper care for these items present many challenges, ranging from a lack of resources to a lack of expertise.

Join us at the McFaddin-Ward House 2013 Conference where we will present a panel of experts to address common conservation conundrums to help you ensure that your belongings and artifacts are conserved for the next generation to enjoy.

Conservation Savvy: From Expert to DIY has been designed to teach proper techniques for collections care through presentations, site visits, and panel discussions. The event will be held in Beaumont, Texas from November 7-9, 2013.

To register, submit your information at the link below. The registration fee includes access to all conference programming and panel discussions, workshops, site visit and all meals, which include:

Register with a credit card online at the links below, or by check by clicking here.

Students
$50
(Proof of enrollment in a qualifying institution required and a $2.24 fee will be added to all online registrations.)

The conference takes place at the MCM Elegante Hotel in Beaumont, Texas. The venue is featuring a special $89 rate. Contact the hotel for reservations at (409) 842-3600.

We are pleased to announce Dr. Karen Pope as keynote for Conservation Savvy: From Expert to DIY. Dr. Pope will give insight into the fascinating and important field of conservation with an emphasis on conservation’s value to art history and viability as a career choice.

With a PhD in Art History (University of Texas 1981), Dr. Pope is a popular lecturer in and around Austin on diverse topics.  With expertise especially in the art of Europe and America in the 19th and 20th centuries, she makes art history accessible and enjoyable for audiences of all levels.

Dr. Pope is a full-time member of the Baylor University Art Department faculty, where she teaches art history courses in 19th-century European and American art, the priority of Baylor’s Allbritton Art Institute.

So don’t miss Conservation Savvy: From Expert to DIY! Be sure to save the dates, November 7 – 9, 2013 for solutions to your conservation challenges-no matter your budget size!

The twentieth century brought rapid and radical change for the world. The McFaddins and Wards could find stability in these uncertain, sometimes unsettling times through their traditions. Tradition remained integral to the most important events of their lives and provided a comfortable continuity; what Ida McFaddin had learned from her mother, she passed on to her daughter Mamie McFaddin Ward.

One of the family’s most deeply-rooted traditions was of hospitality to guests, the antecedents for which came both from the Caldwell family’s practice of high Victorian etiquette and from the McFaddins’ adherence to the frontier code of welcoming strangers. Ida and Mamie made elaborate preparations for visits from family and friends, planning numerous large events—parties and outings—yet never forgot small details. In addition to being spotlessly clean, guest bedrooms were supplied with thoughtful little extras, such as a basket of fruit, reading material, and a water carafe and drinking glass on the bedside table.

Ida planned and ordered meals at the McFaddin home. The most formal dinners were served á la Russe, or in the Russian style. The butler or maid brought in the food and served each diner individually, leaving no large dishes on the table. Dining á la Russe demanded considerable skill and strength on the part of the domestic employees. Ida’s granddaughter Rosine McFaddin Wilson remembered the heavy platters “trembling from the strain on the butler’s arm as he extended the tray between the high-backed chairs.”

In what seems odd today but was common in the 1920s and 1930s, the thoughtful hostess offered cigarettes after dinner to her guests. (At that time, there were only a few brands of cigarettes, and no choice as to variety, such as filter or menthol.) Ida and Mamie even purchased specially-designed Dresden cigarette servers that matched their extensive Dresden dinner service. Today, of course, it would probably be considered more important for a hostess to consider non-smoking guests’ interests.

In contrast, other McFaddin family meal traditions were much less structured and dignified. Wilson recalled that the dining room often rang with lively discussions (sometimes even arguments) and uproarious laughter. After the meal ended, the adults retired to the library, where the women sat and chatted and the men stretched out on the floor for a short snooze.

Death invoked a number of traditions, some quite complicated. Knowing for certain how to show proper respect for the deceased was reassuring to the bereaved and took away the need for difficult decisions.

Etiquette books delineated a specific dress code for mourners: a woman dressed all in black for a year and a half after losing a husband; one year for a parent or child; six months for a sibling. Then followed a state of half-mourning and she could wear lavender, gray or white. Men wore a black armband. Many mourners ordered black-bordered stationery and some even had their jewelry reset in jet. During the mourning period, the bereaved could attend church and small social functions but nothing large or frivolous, such as a ball.

After Ida died in March of 1950, Mamie stayed out of the social loop for well over a year. On November 7, 1951 she wrote in her journal, “wanted to go to concert with Carroll but could not do it—can’t be in crowds after losing Mother.” Her niece Rosine Wilson recalled that Mamie attended her wedding in 1951 but would not go to the reception.

Both the Caldwell and McFaddin families observed the custom of placing the deceased in a bedroom for visitation, fully dressed but partly under the covers, a ritual dating from a time before funeral homes with special viewing rooms were available.

On a lighter note, Aggie sports traditions came to the McFaddin home when Carroll Ward married Mamie in 1919. Carroll especially loved football, having been a star player at Texas A&M College (now University) from 1908-1910, and he remained an ardent supporter. Texas A&M is famous for school spirit and tradition. Carroll and Mamie usually attended the A&M-Texas University game on Thanksgiving Day, and on rare occasions when they could not be there in person, they listened to it on the radio. Mamie recorded the final score each year in her diary.

Even ever-changing fashion operated within social restraints. Dresses could be long or short, hat styles large or small, but a properly-clothed woman left her home wearing a skirt or dress, not pants, and always with her hat and gloves. “I never saw my mother without a hat and her gloves when she left the house,” Mamie once said.

Ida and Mamie shopped for new styles well ahead of the season. They also had that season’s clothing brought down from storage on the third floor. A flurry of activity followed, to make the clothes ready for wearing. A seamstress came by to let seams in or out, raise or lower hems. Then the ladies returned to town to the Fashion or White House to find any needed accessories to complete their wardrobe. Their careful seasonal planning always guaranteed that they had the proper ensemble.

As a child, Mamie learned how to shop from her mother. “I don’t think Mother ever shopped without me,” Mamie recalled. “From the time I was a little bitty girl she said she wanted to teach me how to buy good things, that one good thing would outlast five cheap things.” When Mamie was young, Ida had most of her clothing made by Madame Dunlevy in Cincinnati. On her way to visit family in Huntington, West Virginia, Ida would stop in Cincinnati and choose style and fabric; then on her way back to Beaumont would stop in for her final fitting. Mamie recalled that Madame Dunlevy “sent them one dress in a box. They were really works of art.”

For the McFaddins, “Tried and True” was much more than just a cliché; it described their way of life. Tradition, handed down through generations, provided comforting parameters. From birth to death and all the phases between, tradition kept their world intact.