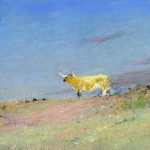 Our House is Your House: Key Hunt