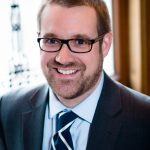 Dan Hartman says he is defined by three main passions: he loves Duluth, he loves public policy, and he loves history.

Hartman also knows how to transform a museum.

The historian/city councilman is best known for bringing the state’s most popular museum into the 21st century. At the Glensheen House, the red velvet ropes are gone, 80-year-olds stand next to 20-year-olds enjoying drinks and music at museum events. And they are allowed to take pictures inside the house for the first time in 35 years.

Director Dan Hartman understands the debate of preserving history while engaging the public, but he says the old ways weren’t working. “We have to find new, creative ways to start bringing people back,” he said.

The Glensheen Museum’s attendance has risen dramatically since Hartman came on board.

“There are many folks who have lived in the city for a long period of time who have never been here. And frankly we haven’t given them a lot of excuses to do that.” Hartman said. Glensheen has also launched several personalized tours including an evening flashlight tour of the mansion, and a behind-the-scenes “nooks and crannies.

Dan Hartman will be guest speaker at the McFaddin-Ward House’s upcoming Free Lecture on February 18, 2016. The event is free and open to the public and includes a reception following the event.