Sea of Mud: Retreat of the Mexican Army After San Jacinto McFaddin Family at San Jacinto 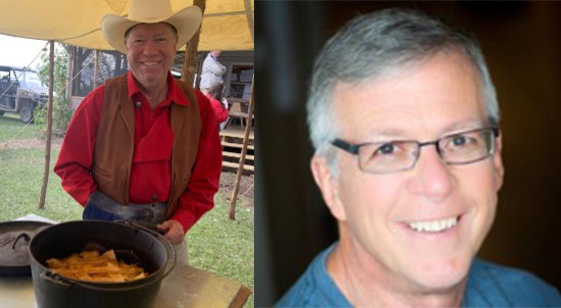 Bill Wilson, descendant of William McFaddin, will share an interesting written account of the Battle of San Jacinto penned by William McFaddin and also provide a glimpse into the McFaddin family ties to this historic battle. Bill Wilson was born and raised in Beaumont, Texas and is a 6th generation Texan continuing the tradition of cattle ranching and farming in Jefferson County. In addition to his personal businesses and investments, he ran the McFaddin Family offices in Beaumont for over 42 years. Now retired, he enjoys working on the ranch, cooking on his restored chuckwagon, and sharing stories and family lore about the McFaddin experience in the early years of Texas.

Gregg Dimmick will delve into the plight of the Mexican soldiers who were not at the Battle of San Jacinto who tried to withdraw to Victoria, TX. On their trek, torrential rains caused the soldiers to be stuck in the mud and disaster ensued. Dr. Dimmick, author of  Sea of Mud, The Retreat of the Mexican Army After San Jacinto, An Archaeological Investigation, is an avocational archaeologist and coauthor of two archaeological reports on excavations of the retreating Mexican army of 1836. He participated in archaeological digs at the Fannin battle site as well as the San Jacinto battlefield. Dr. Dimmick appearances on the History Channel and the Discovery Channel relate to his work on the archaeology of the Mexican army. Gregg Dimmick M D is a retired pediatrician in Wharton TX.