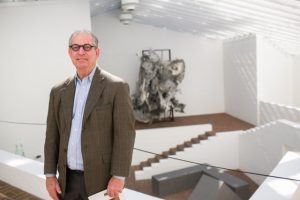 Named as the Executive Director of the McFaddin-Ward House in January 2021, Tony L. Chauveaux is responsible for planning, directing and administering all programs and activities of the museum. Chauveaux, formerly a corporate attorney with the Beaumont, Texas firm of Crutchfield, DeCordova & Chauveaux, graduated from the University of Texas at Austin with a Bachelor of Journalism, and earned his Juris Doctor degree from St. Mary’s University School of Law.

Between his “tours of duty” at the National Endowment for the Arts, Chauveaux served as Executive Director of Longue Vue House and Gardens in New Orleans, Louisiana, from 2013 to 2017.

Prior to his moving to New Orleans and Longue Vue House & Gardens, Chauveaux served as the Deputy Director of The Ronald Reagan Presidential Library & Museum in Simi Valley, California.

Whenever possible, he escapes to his ranch in the Texas Panhandle near the town of Claude, which was homesteaded by his ancestors in 1888, and where he was raised.